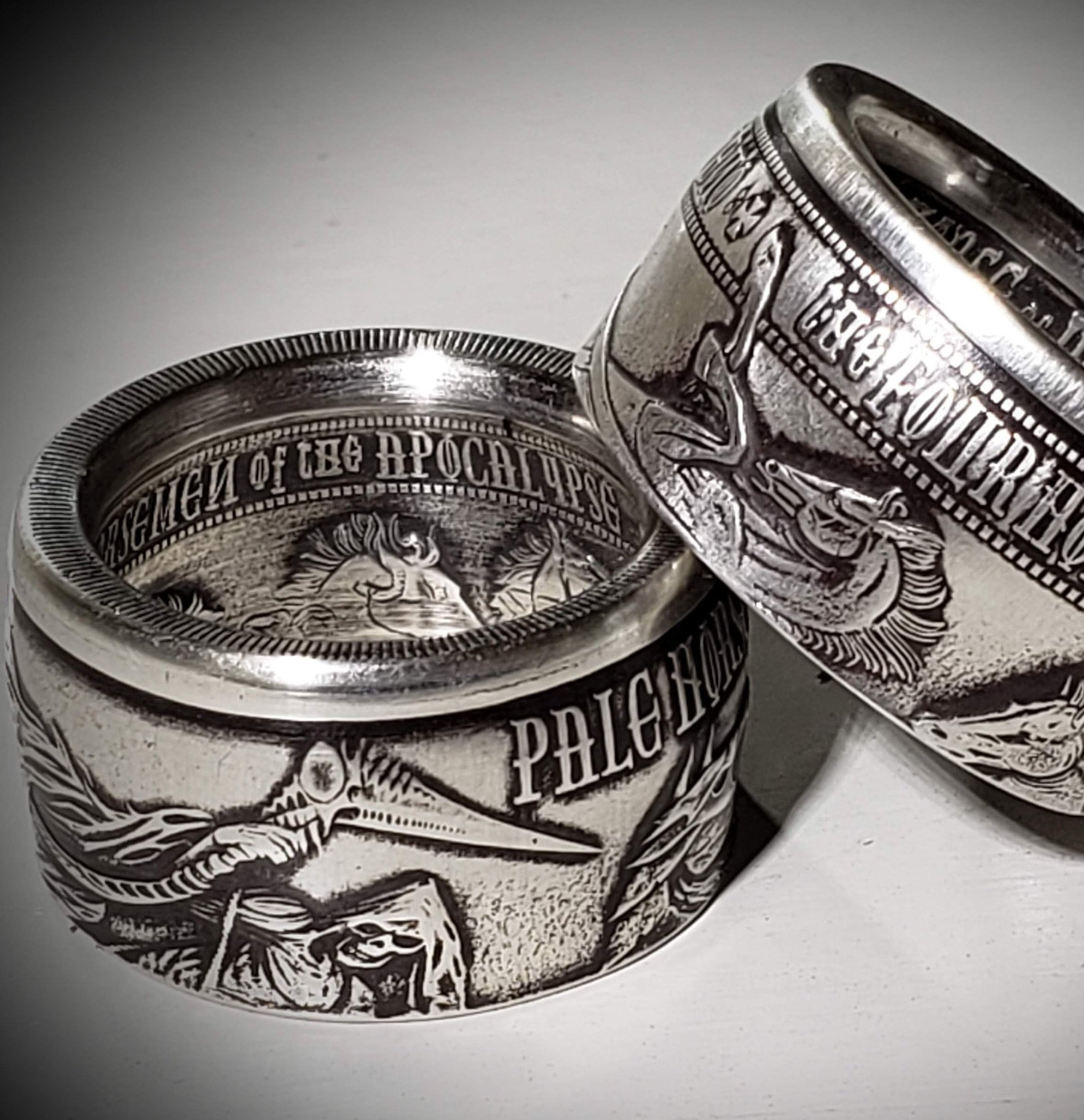 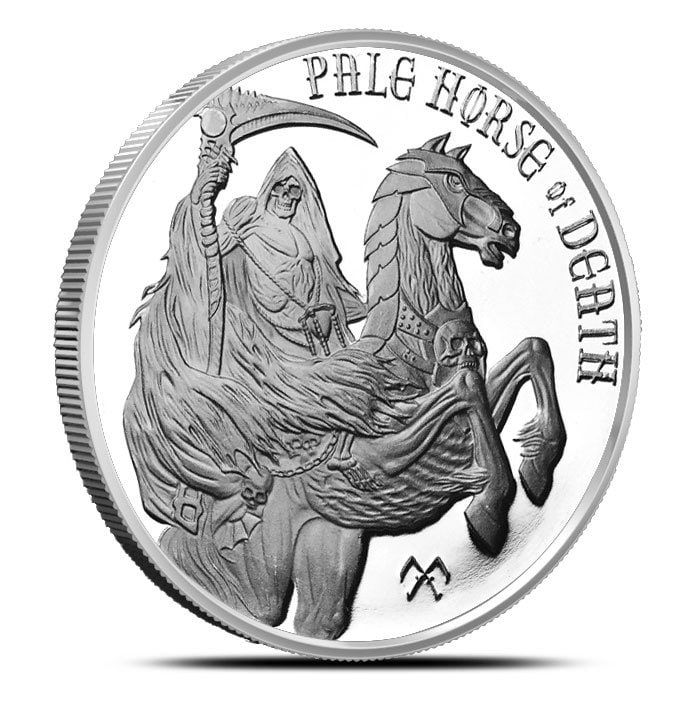 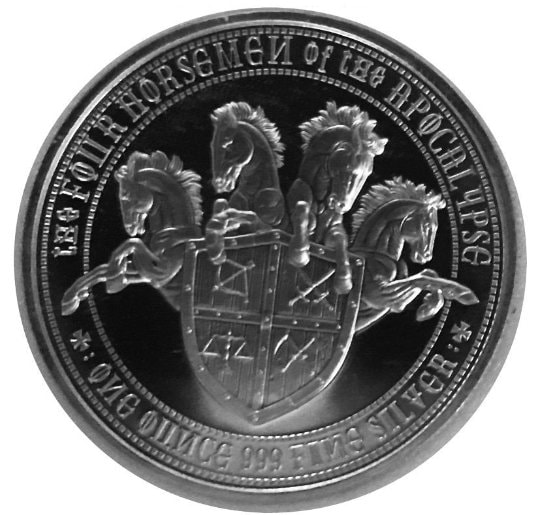 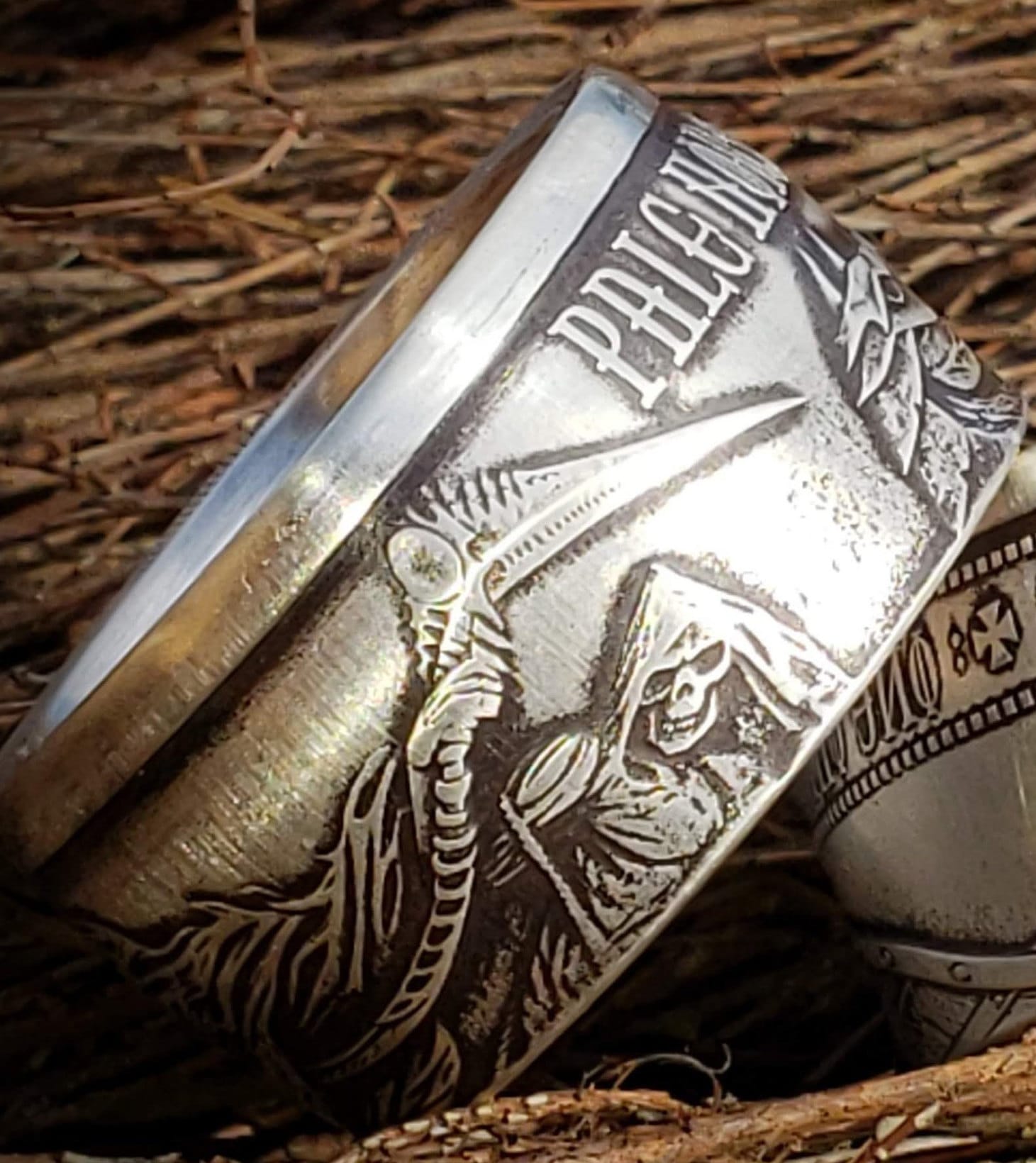 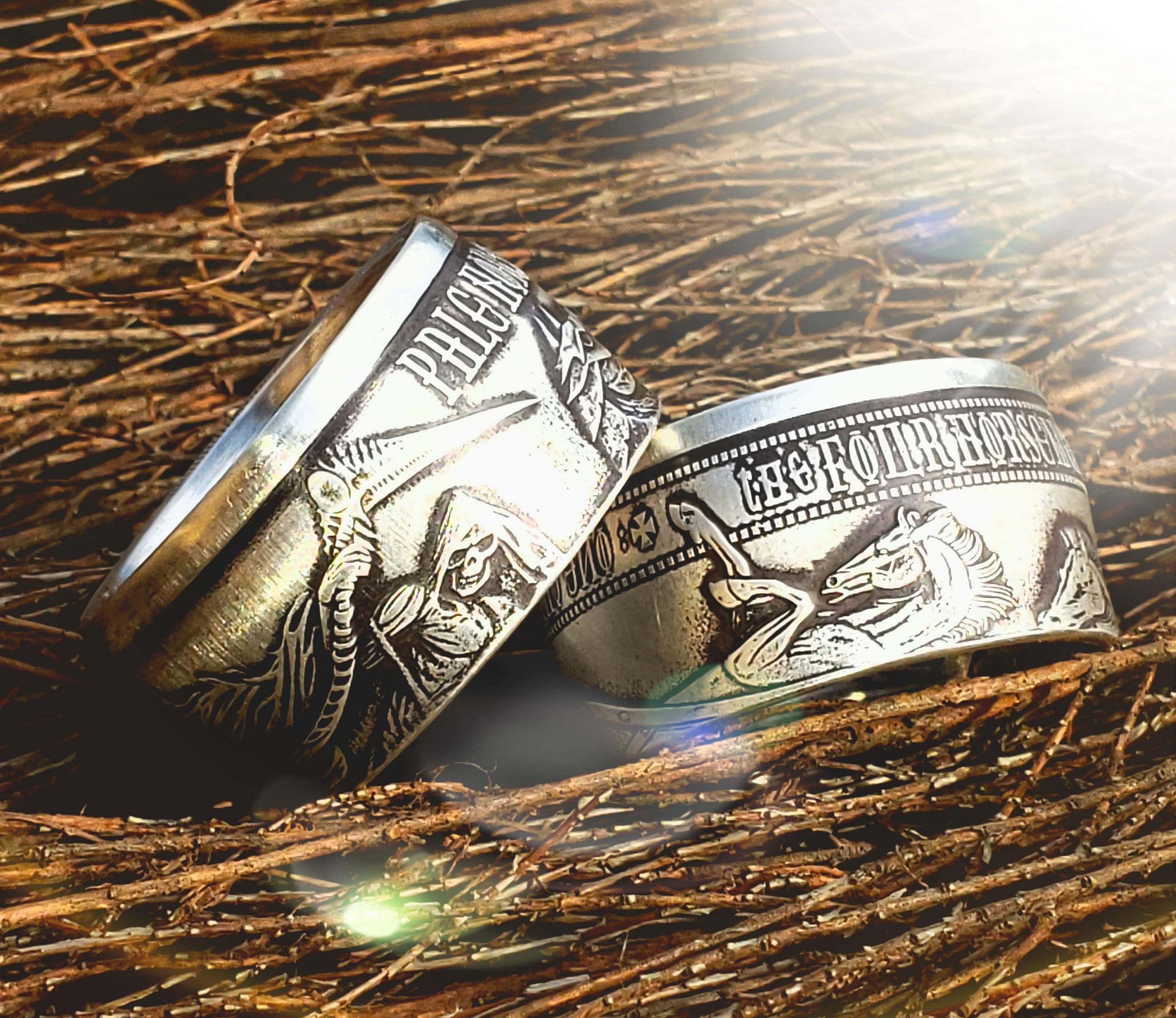 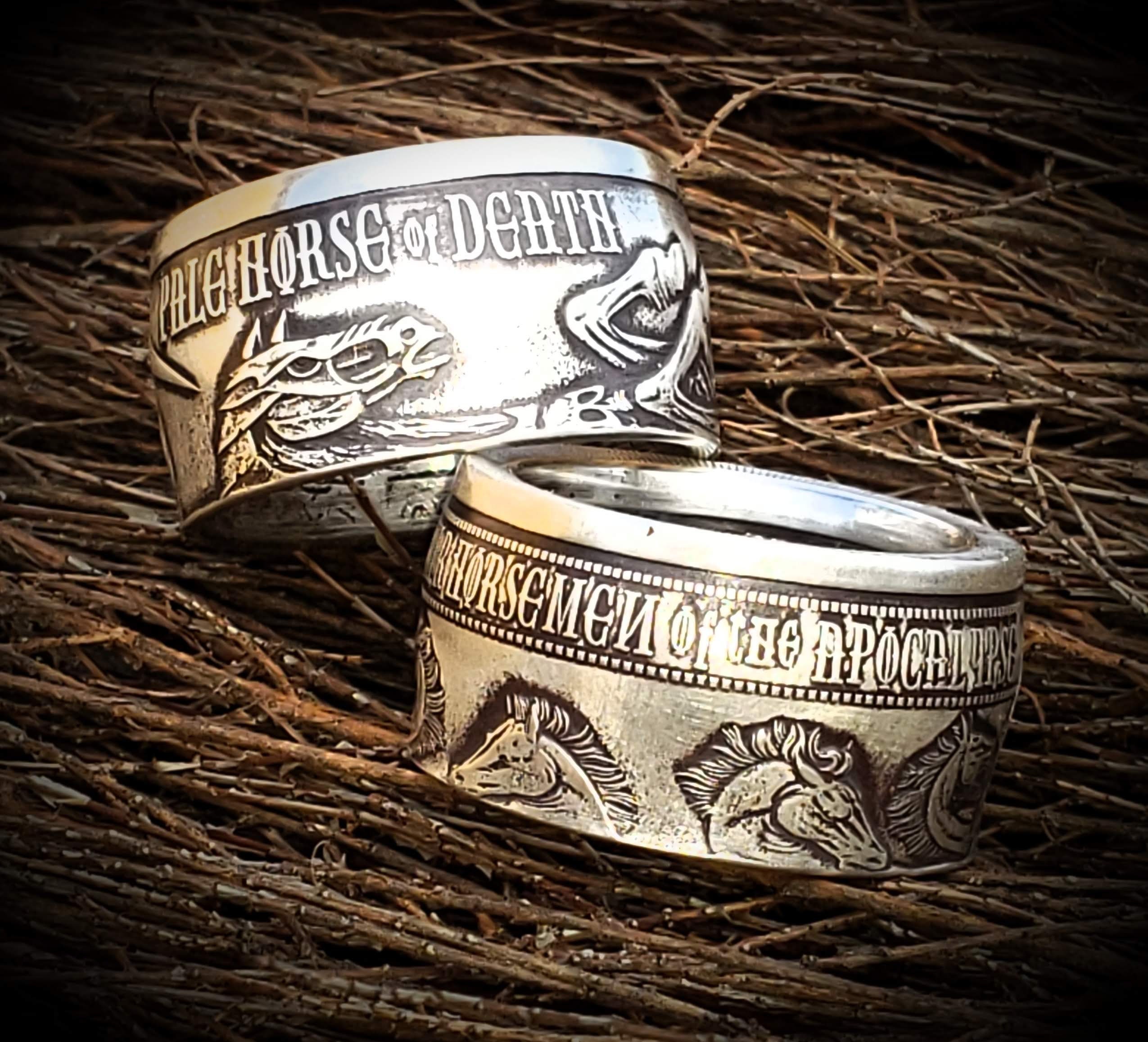 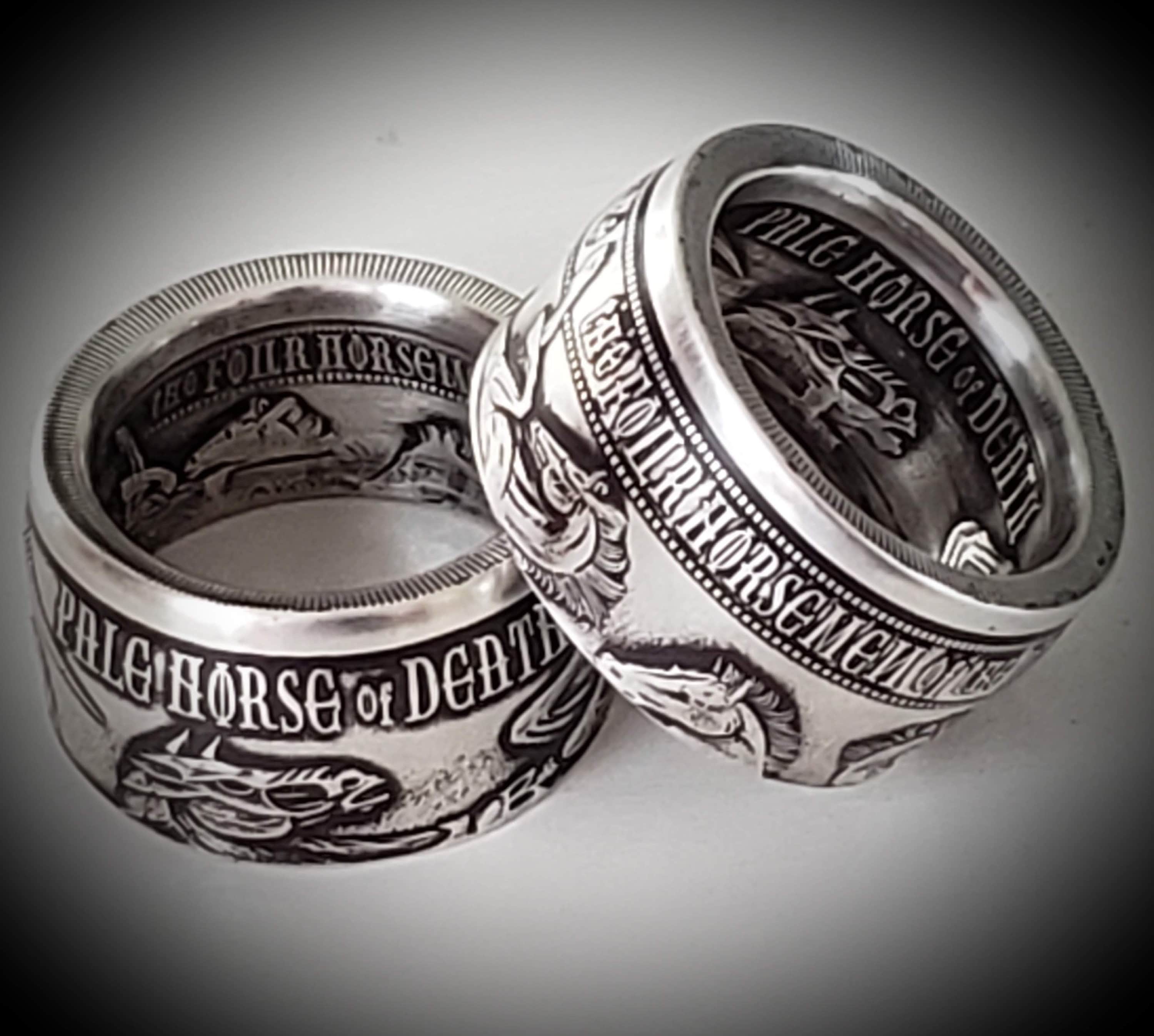 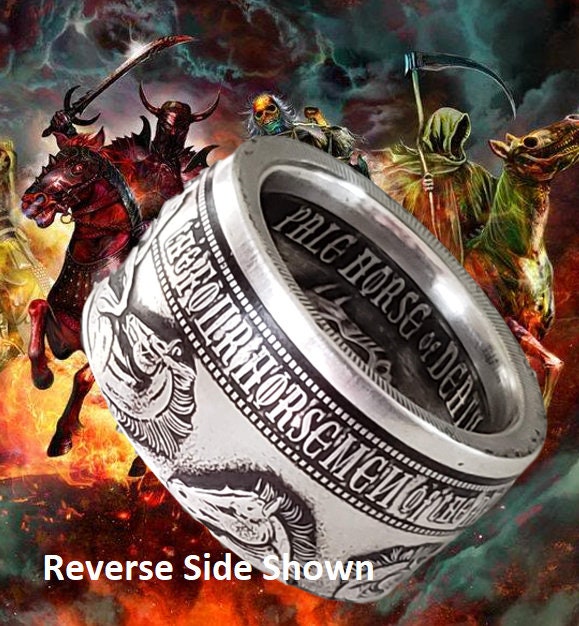 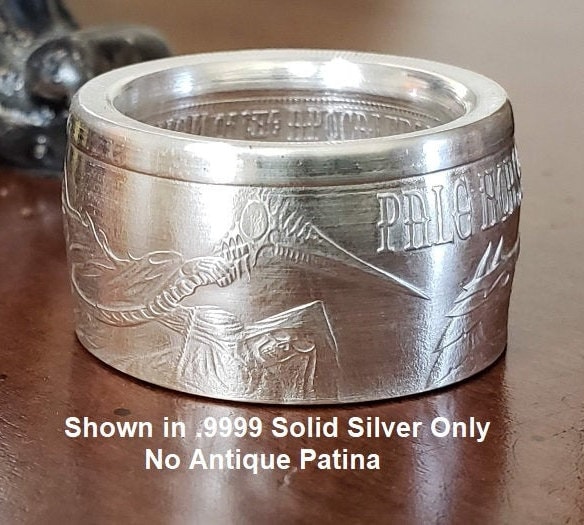 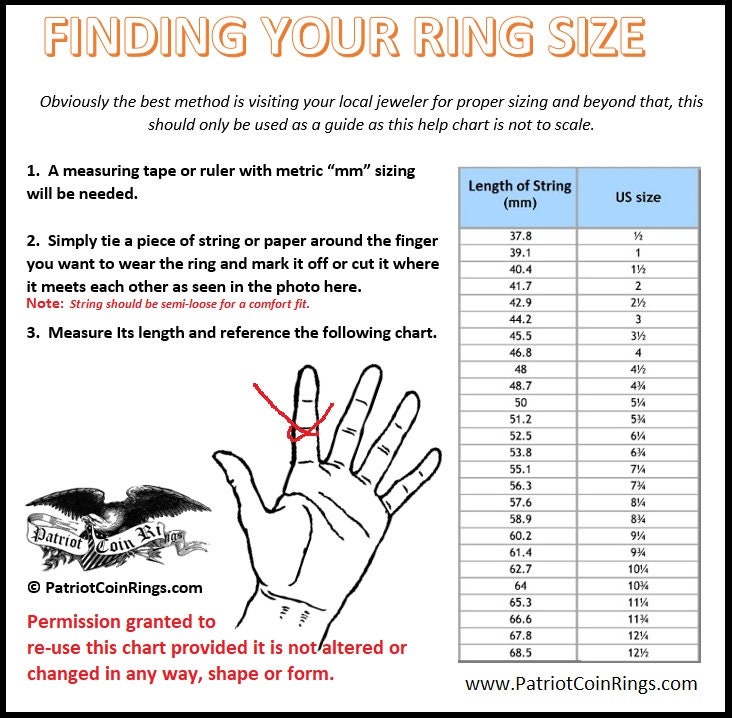 ALERT: The Four Horsemen Apocalypse series is gone!!!!
Production has stopped, nobody seems to have it anymore and the few people who have coins are selling them for upwards of $300-$500 for the coin alone. I have a very small collection of these coins left that I'm selling off as a coin ring here but will be out of these bad boys pretty soon. The White Horse and Pale horse are the rarest as of this moment so expect those to cost a little more.

ABOUT THIS RING (PALE HORSE OF DEATH):
The photo above shows both sides. The Obverse side (left) shows the reaper on the outside with one horse head and the verbiage "Pale Horse" and the Reverse side (right) shows all four horse heads are known as the four horseman side with the verbiage "The Four Horseman of the Apocalypse", What's your preference?

Finish: Photos show the ring in "Antique Patina Finish" although several alternative finishes are available to choose from.
Width: Approx 14mm
Weight: Approx .75oz after completion of the coin ring
Availability: The coin is no longer being minted and is very limited to come by. The price has more than doubled on this coin from last year in price and will only continue to rise!

From the Four Horseman Of The Apocalypse Series - "Pale Horse Of Death" .9999 Solid Silver Coin Ring (1 Troy Ounce Silver). This coin ring is shown above in an "Antique Patina Finish" so be sure to pick that option to the right if that's what you want however this ring is also available in many other optional finishes / precious metals which you may choose from.

This fourth, pale horse, was the personification of Death with Hades following him jaws open receiving the victims slain by Death. Its commission was to kill upon the Roman Earth with all of the four judgements of God — with sword, famine, pestilence and wild beasts. This horseman was said to have the power to “kill by sword, famine, and plague, and by the wild beasts of the earth.” The Greek word chloros is used to describe the horse’s pale color, which translates to green in English. The greenish hue of this horse’s flesh represents sickness and decay. As the horseman rides, Hades follows close behind.

When the Lamb broke the fourth seal, I heard the voice of the fourth living creature saying, “Come.” I looked, and behold, an ashen horse; and he who sat on it had the name Death; and Hades was following with him. Authority was given to them over a fourth of the earth, to kill with sword and with famine and with pestilence and by the wild beasts of the earth.

— Revelation 6:7-8 NASB
The fourth and final Horseman is named Death. Known as "Θάνατος/Thanatos", of all the riders, he is the only one to whom the text itself explicitly gives a name. Unlike the other three, he is not described carrying a weapon or other object, instead he is followed by Hades (the resting place of the dead). However, illustrations commonly depict him carrying a scythe (like the Grim Reaper), sword, or other implement.

The color of Death's horse is written as khlōros (χλωρός) in the original Koine Greek, which can mean either green/greenish-yellow or pale/pallid. The color is often translated as "pale", though "ashen", "pale green", and "yellowish green" are other possible interpretations (the Greek word is the root of "chlorophyll" and "chlorine"). Based on uses of the word in ancient Greek medical literature, several scholars suggest that the color reflects the sickly pallor of a corpse. In some modern artistic depictions, the horse is distinctly green.

The verse beginning "they were given power over a fourth of the earth" is generally taken as referring to Death and Hades, although some commentators see it as applying to all four horsemen.

===========================
HELPING OUR DISABLED VETS!
Were you aware the majority of all net proceeds are donated to the Wounded Warrior Project charity to help our disabled vets get the treatment needed beyond what is provided by the government or military VA. The WWP assists in extended medical, rehab, re-vocational and assisted living. As a fellow vet who never needed these things, I thank you for taking care of those real heroes who do!

“If I can be a part of an organization that helps people heal and find peace, then the end of my service is not the end. I’m just serving in a new way now.”

The ring is amazing, size was accurate, and Michael’s service was awesome. I’m very happy.

Super neat ring! My husband loves it! The seller was wonderful and communicated well. Thank you so much!

These rings are fantastic! Great quality and well made. A great seller to work with! Very helpful and accommodating! Thank you!

Great customer service. Tends to fit on the large side but such great looking work. They will take care of you. Great communication as well.