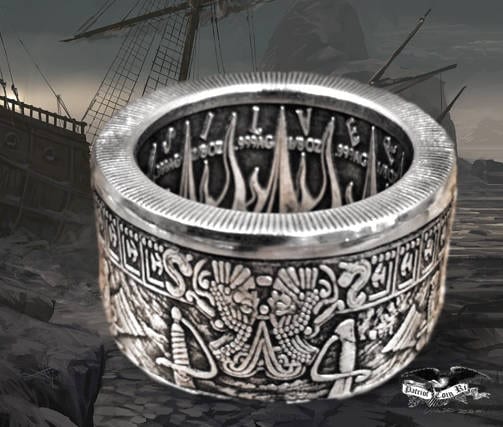 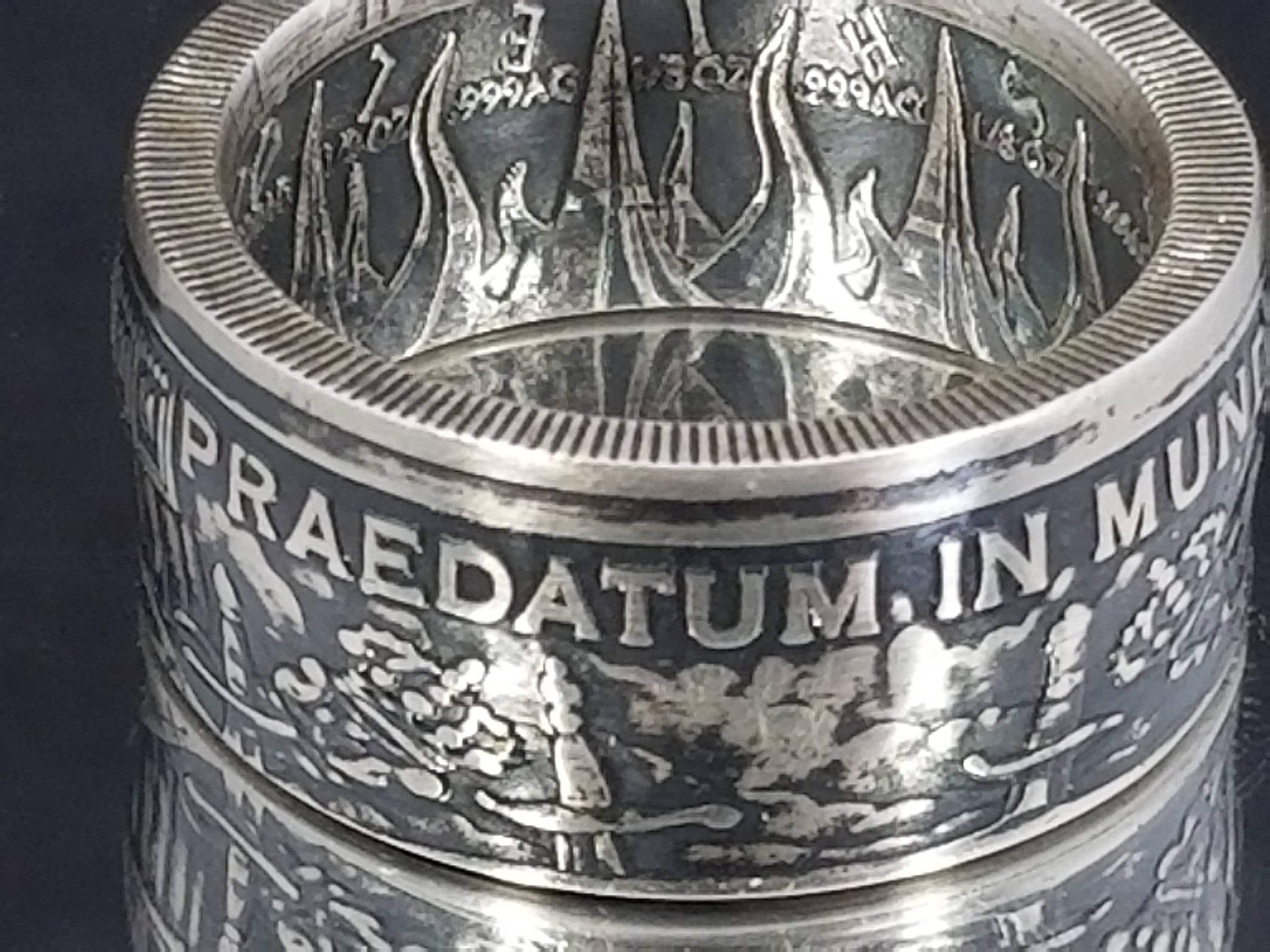 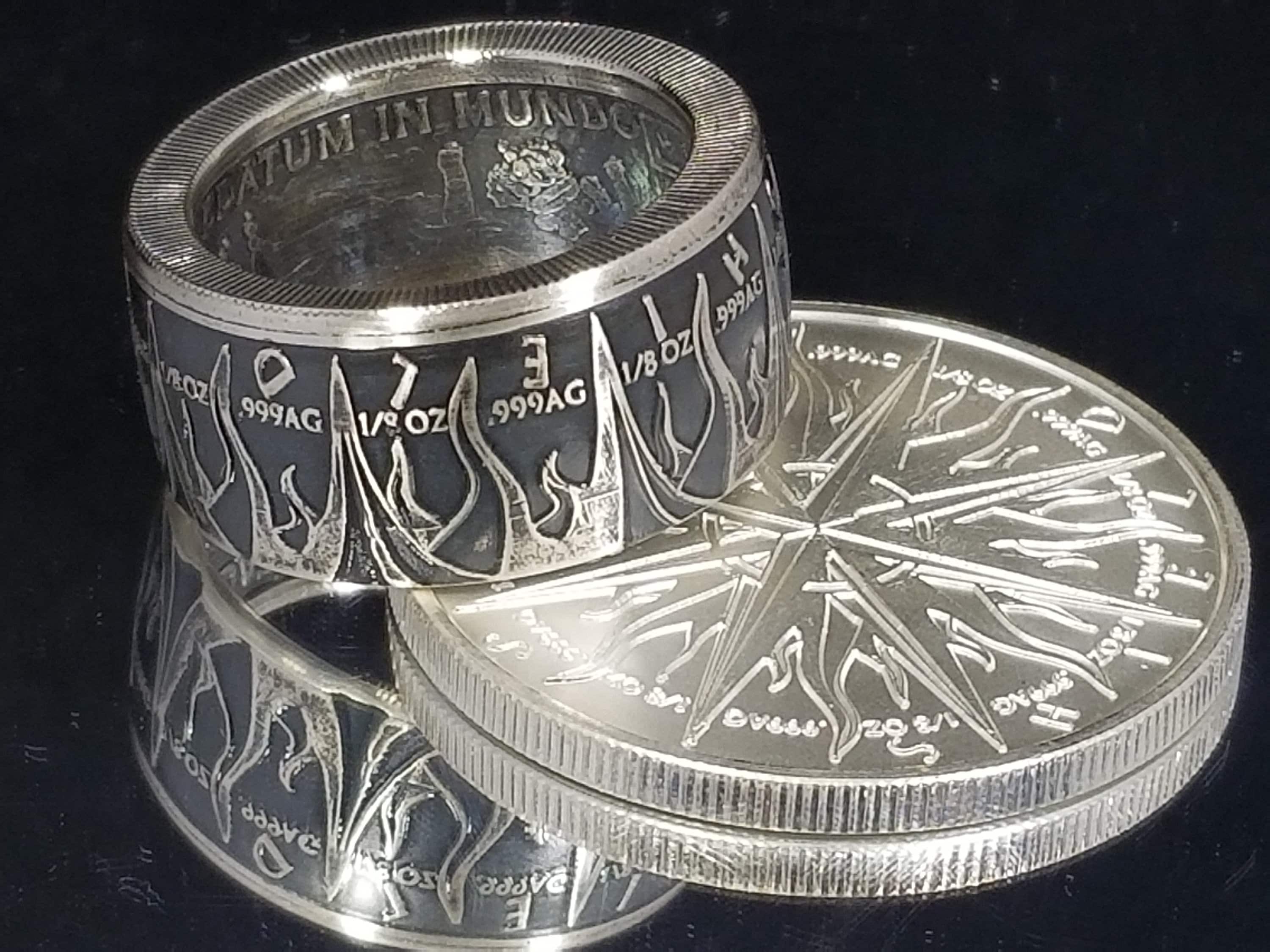 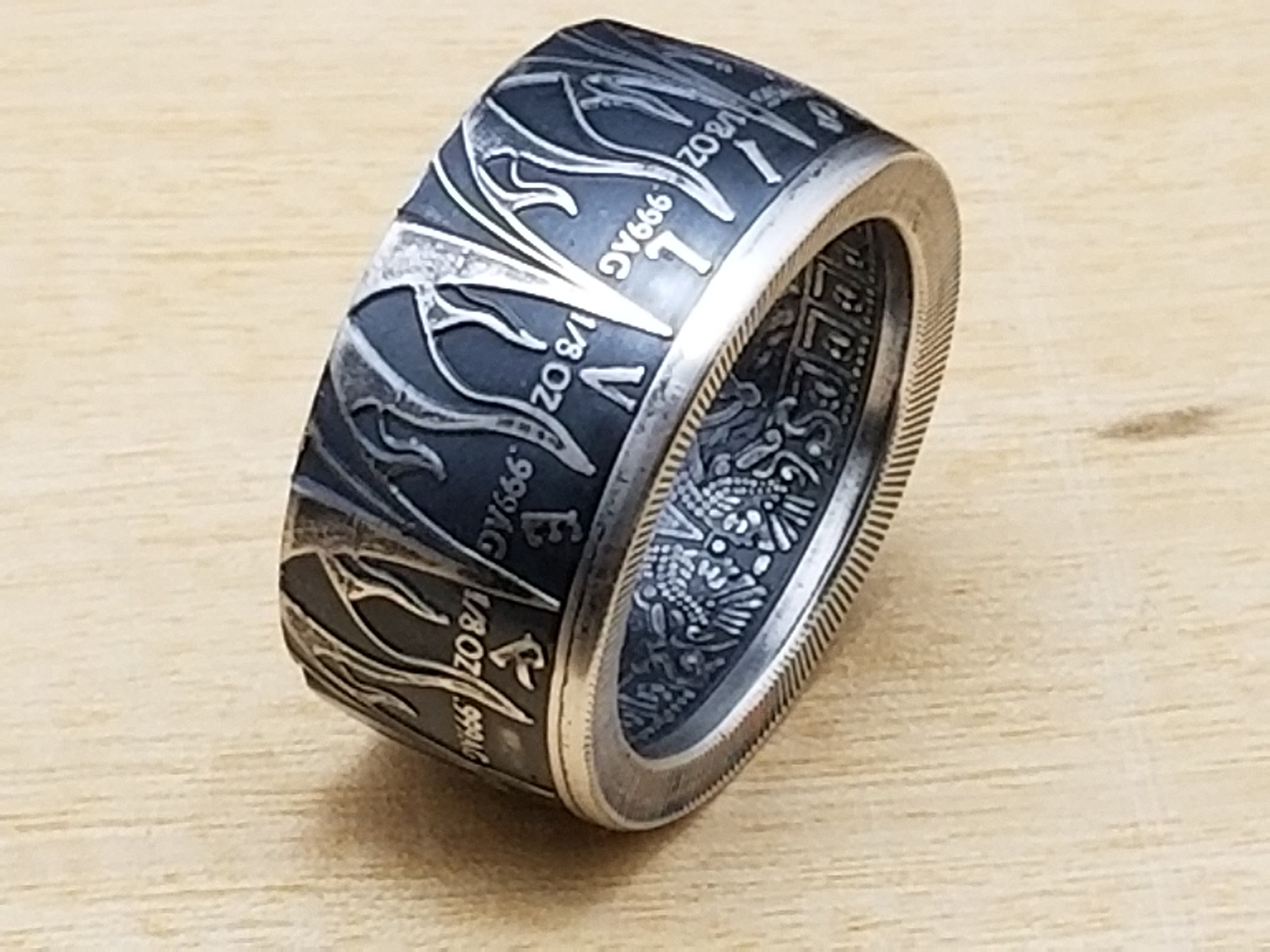 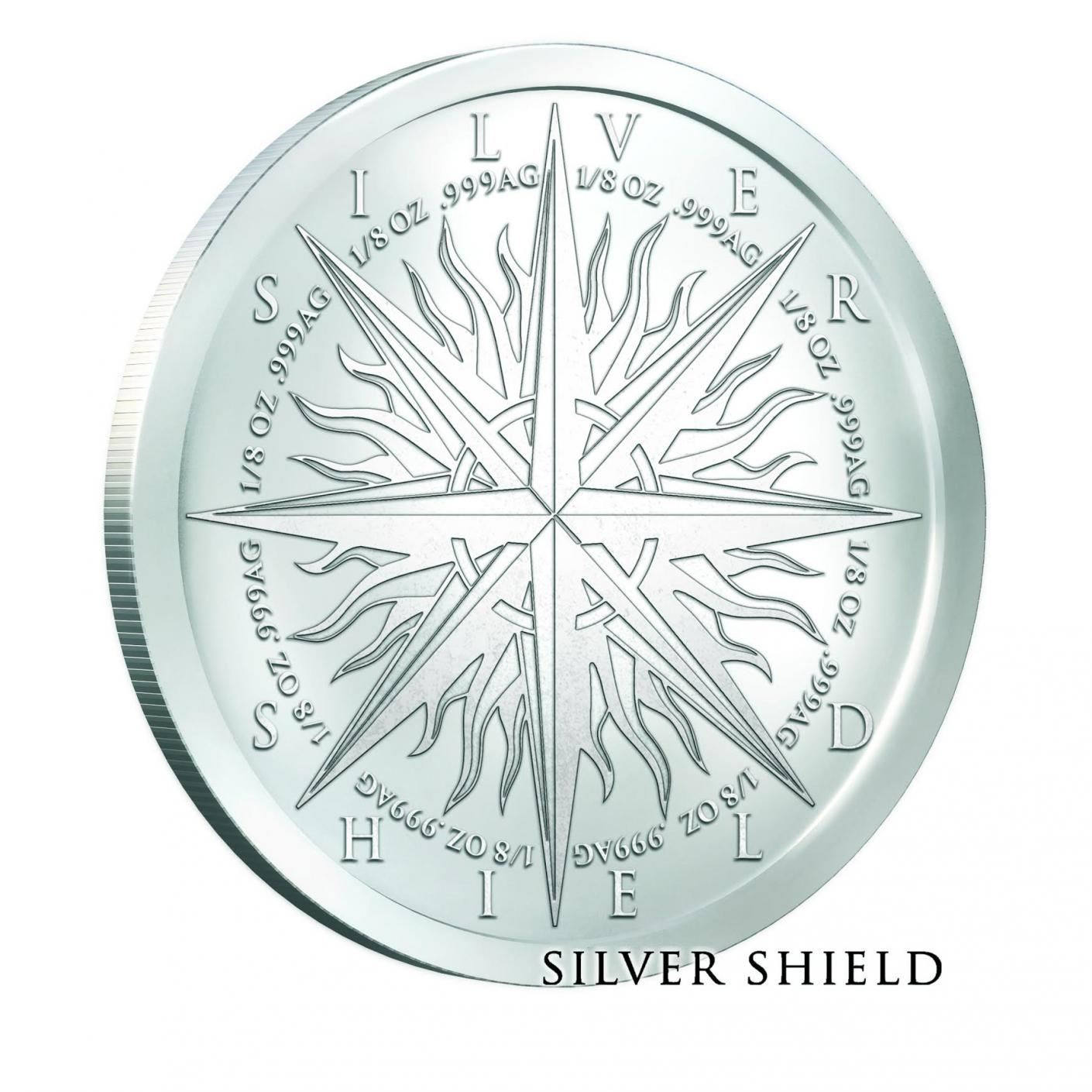 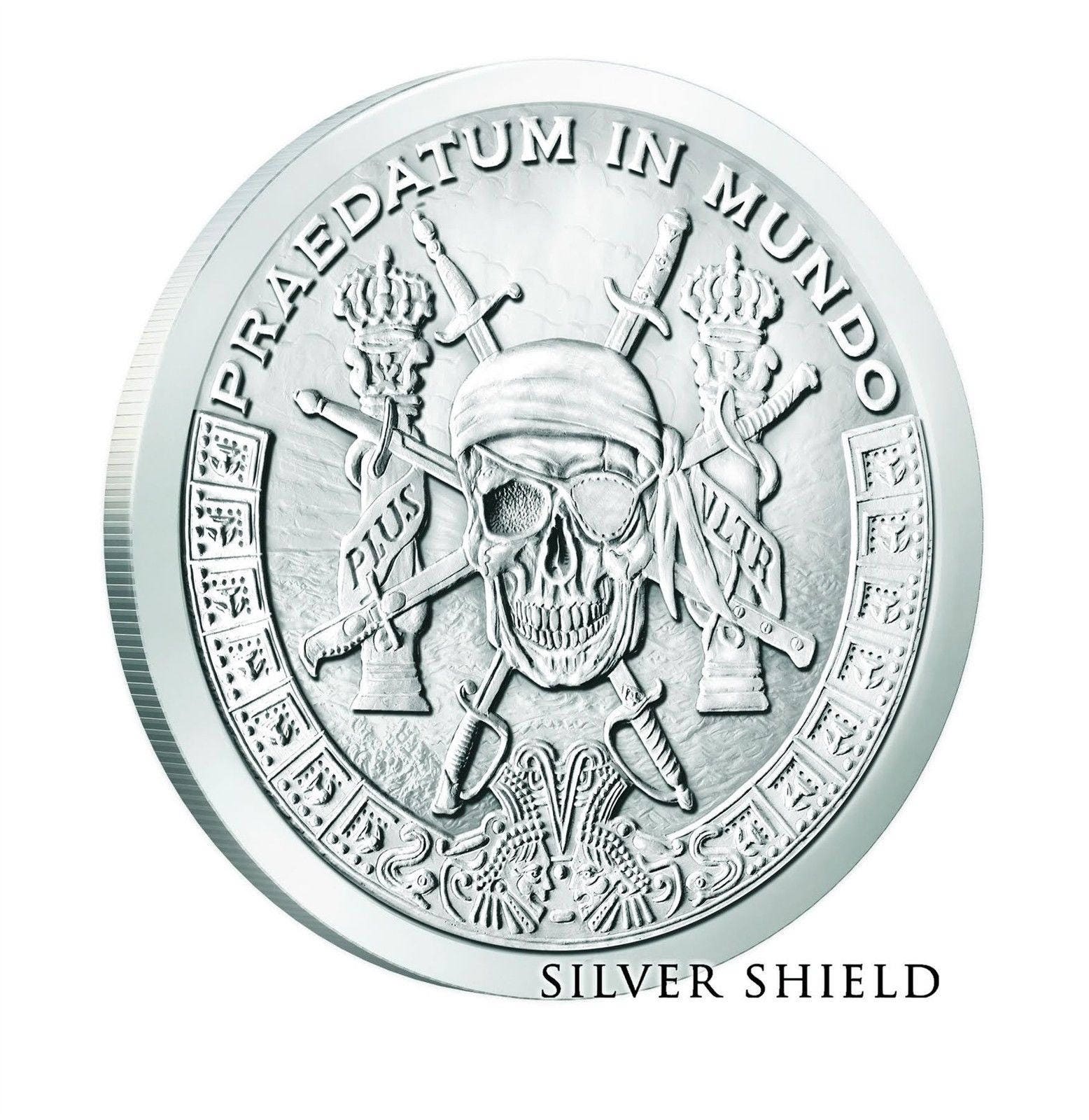 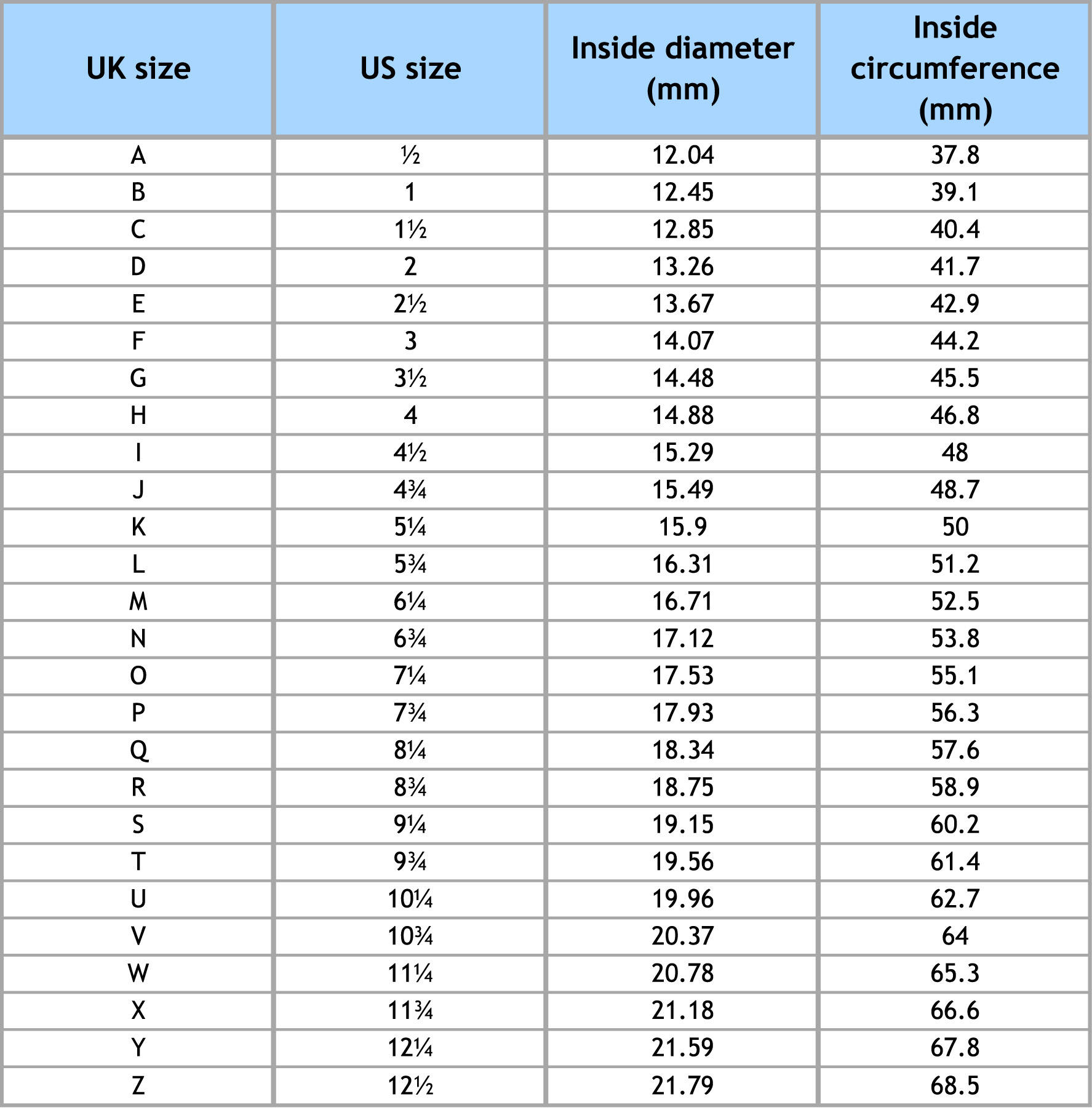 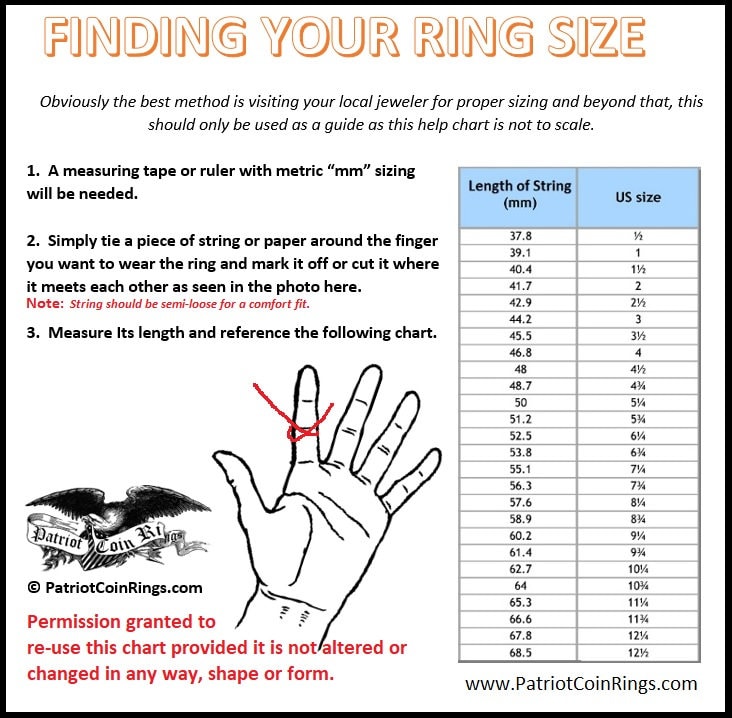 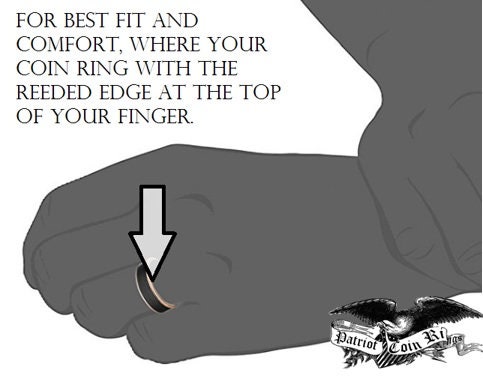 Note: Silver has been going up fast (estimated 200% in value over the next two years) so I'm going to be forced to raise my silver prices soon. Hurry and take advantage of this now while it's still here. The cost for this coin alone on Amazon right now as exceeded the $65 mark (feel free to check) so I can't hold this price for long.

WATCH THE VIDEO OF THIS RING BEING MADE!
https://www.youtube.com/watch?v=2rZ87AWol5I

- US Sizes 4-18
- Feel free to let me know if you prefer a straight wall or rounded fat tire wall look in your order if you desire.
- Choose which side you would like on the outside (obverse (swords) or reverse (flames) side out). If you don't indicate, I will make it just as seen here.
- Obverse: Depicts a pirate with the words Praedatum in Mundo which translates into "A Predatory World".
- Reverse: Shows Flames along with the purity and weight of the (8) 1/8 oz pure Silver pieces of the 1 oz Silver round.
- Hand Crafted to fit any size thumb or finger. Just indicate what size you need.
- Comfort Fit Siding
- Available in .999 Mirror Polished Finish, Antiqued Patina Finish, 14K Gold or 24k Gold Plating
- Shipped in beautiful Ring Box (perfect particularly if being purchased as a gift)
- High Quality, High Detail, Fast Turn Around Times!
- Includes our Lifetime Guarantee**


**Our "Satisfaction Guarantee" If you are not happy with your ring right off the bat, send it back to me "NO QUESTIONS ASKED" and you'll be refunded in full minus shipping expense or you can choose to get a replacement or put the money towards a completely different coin ring. You have 3 days from time of first receiving your coin ring to contact us via email if you want to take me up on this guarantee. I want my customers to be happy with their purchase and won't make you keep your purchase if you don't like what you get. Buyer is responsible for all shipping costs.

**Our "Lifetime Guarantee" insures a lifetime of pride in craftsmanship quality for the life of the buyer. If for any reason the coins Patina fades over it's life time, just return it to me and I'll re-patina it and polish it out again free of charge. Buyer pays for all shipping costs. This does not apply to plating services. All plating services are guaranteed for 1 full year against fading due to normal wear. However if you damage your coin, scratch it, or other that isn't covered, you can always contact me anytime and i'll be happy to re-apply what you purchased for a very nominal cost. I'm very easy to work with and 90% of all my work and orders are nearly all by word of mouth and I want to keep it that way.

**FREE RING: Buy Five (5) Rings (any rings from my ETSY store) and get a 6th Ring FREE! The free ring must be valued at or below the lowest cost of the five rings you purchased. Another way to look at this FREEBIE OFFER is to pick 6 rings you really love and the lowest priced one of the 6 is free simply as a thank you for your business.

**Feedback: I strive for all 5 Star Feedbacks. If you feel I don't deserve 5 Stars, please contact me immediately so I may rectify the situation immediately for you. We make a living on our reputation and desire 100% Sanctification from our clients.

Got Questions? Send me a PM anytime and you'll get a fast reply typically within 24 hours!

The quality is absolutely amazing—- and I mean spectacular!!! The customer service is top notch! I have chatted with the shop owner numerous times prior to ordering and all of my questions/inquiries were answered right away! Very helpful, knowledgeable and friendly!! Customer service at this rate is no longer the norm these days ... so much respect for Michael and crew!!

This ring is wonderful. Size was accurate and craftsmanship is top notch. Great customer service too.

Beautiful piece! I will have to come back and get another for myself!

WOW!!!....I received my coin ring today and all i can say as it is absolutely amazing!....beautiful craftsmanship and it fits perfectly!!...From the very beginning of the ordering process Michael has been kind and professional , when i needed to change the ring size Michael responded swiftly to let me know that the change will be made , no fuss and no hassle!!....i highly recommend shopping with Patriot coin ring!!...if there was a 10 star Michael would definitely receive it!!...thanks Michael i will definitely be ordering more from you soon! Respectfully, Erryk

Gorgeous, unique ring made with very fine craftsmanship! Love it. Hefty, tough, and damn good lookin! I'll be back for more :)