METEORITE - STUNNING & AUTHENTIC Campo Del Cielo (Asteroid plummets to earth over 4,000 years ago from Outer Space and you can own a piece ) 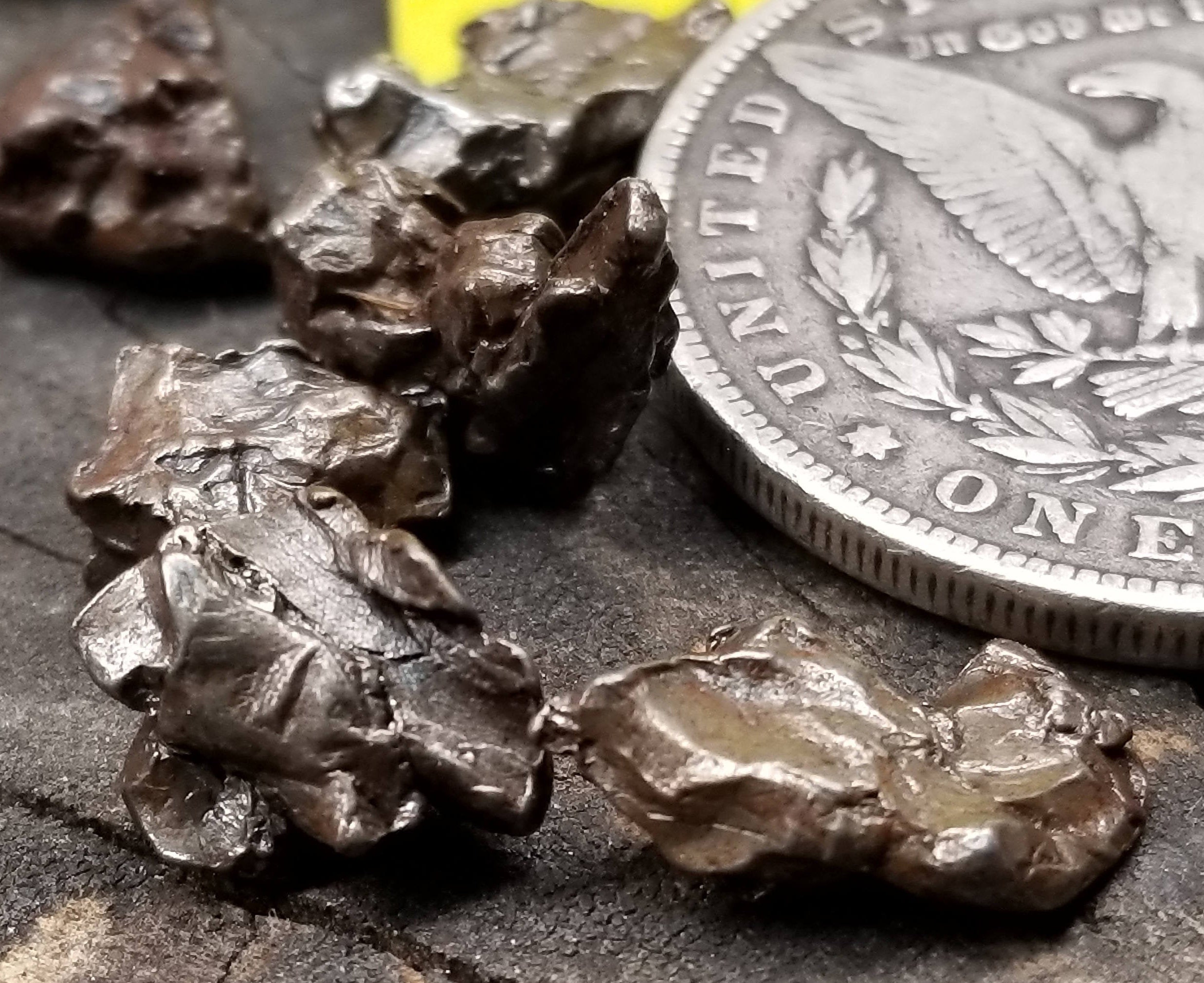 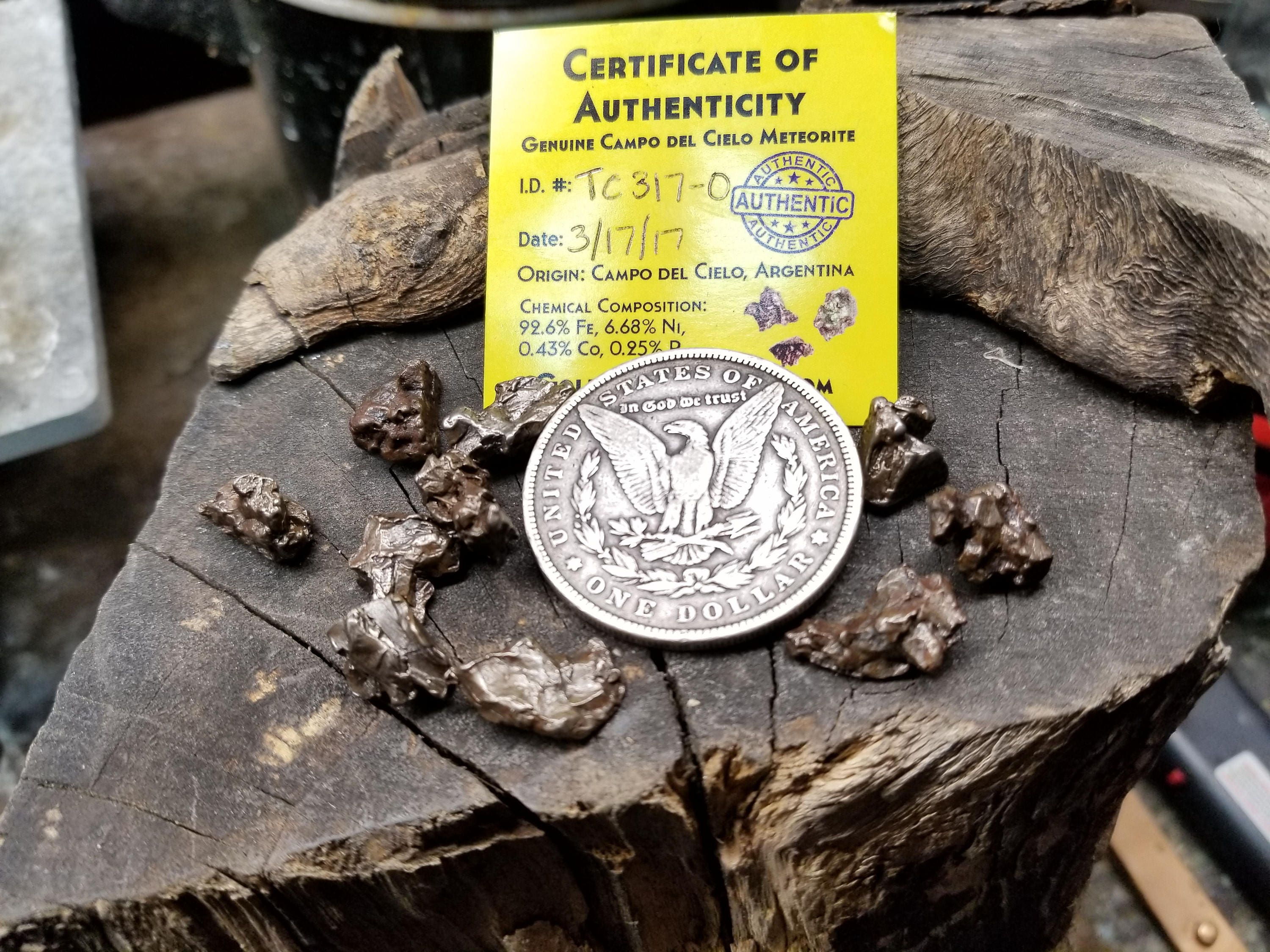 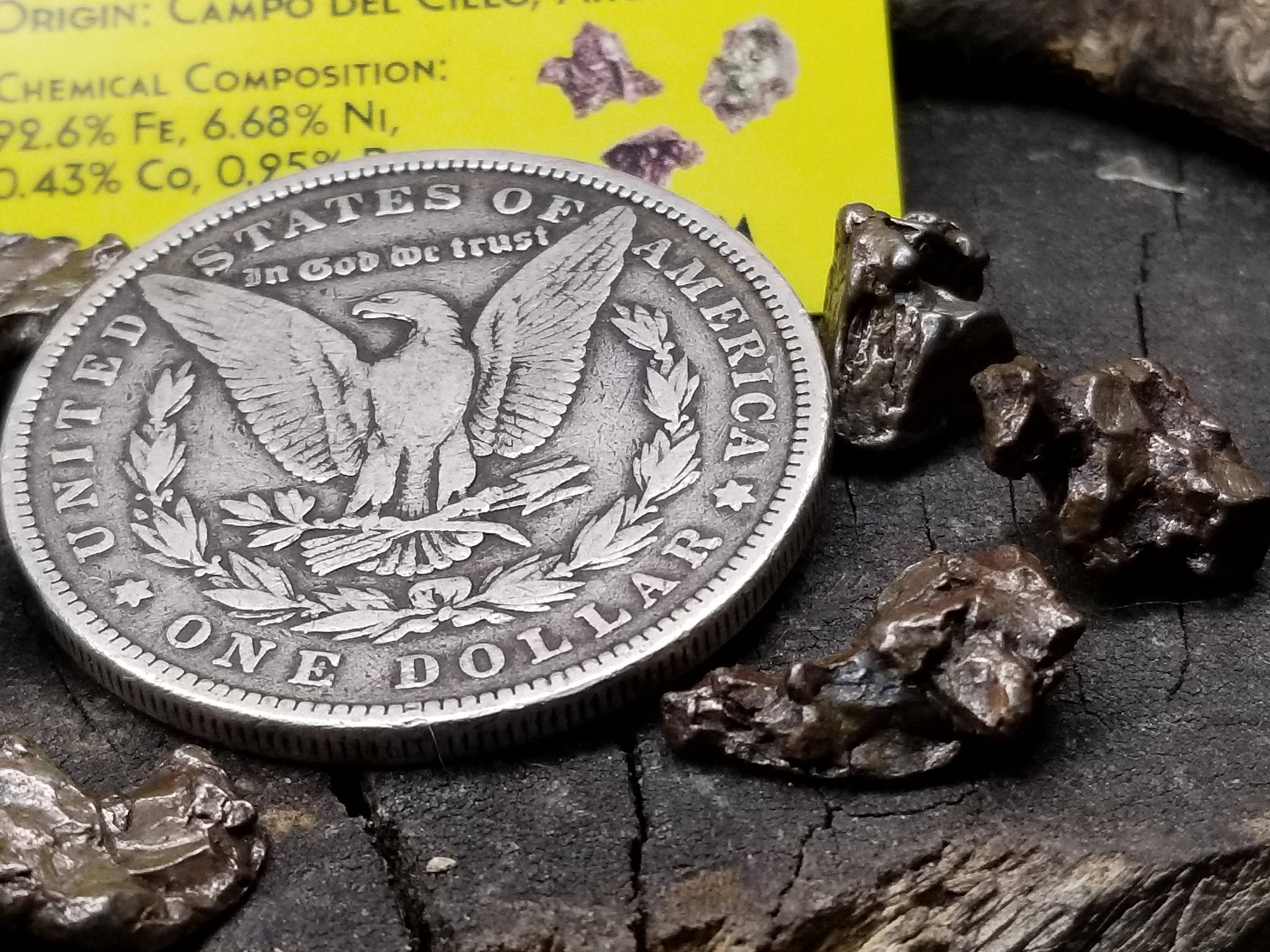 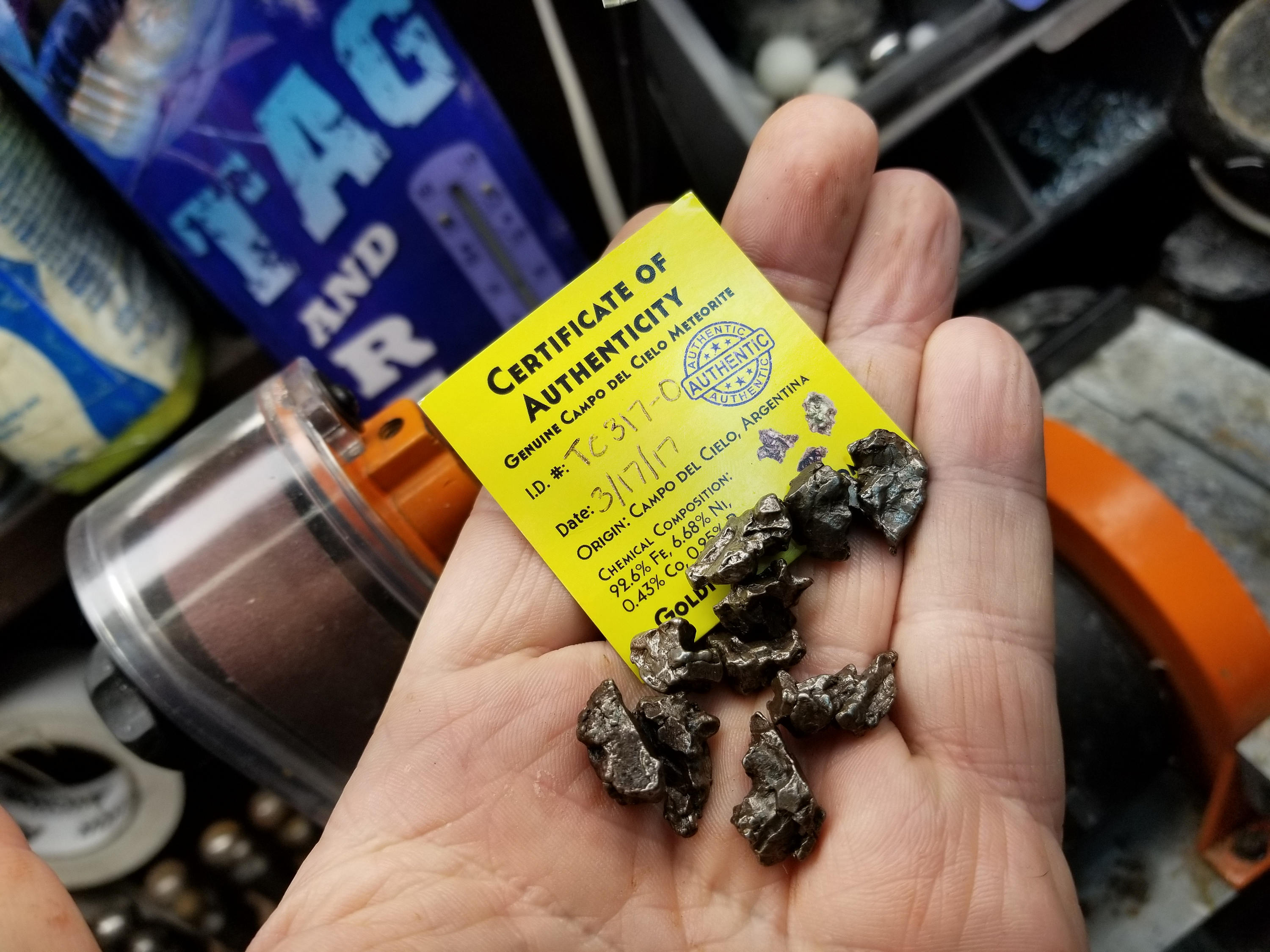 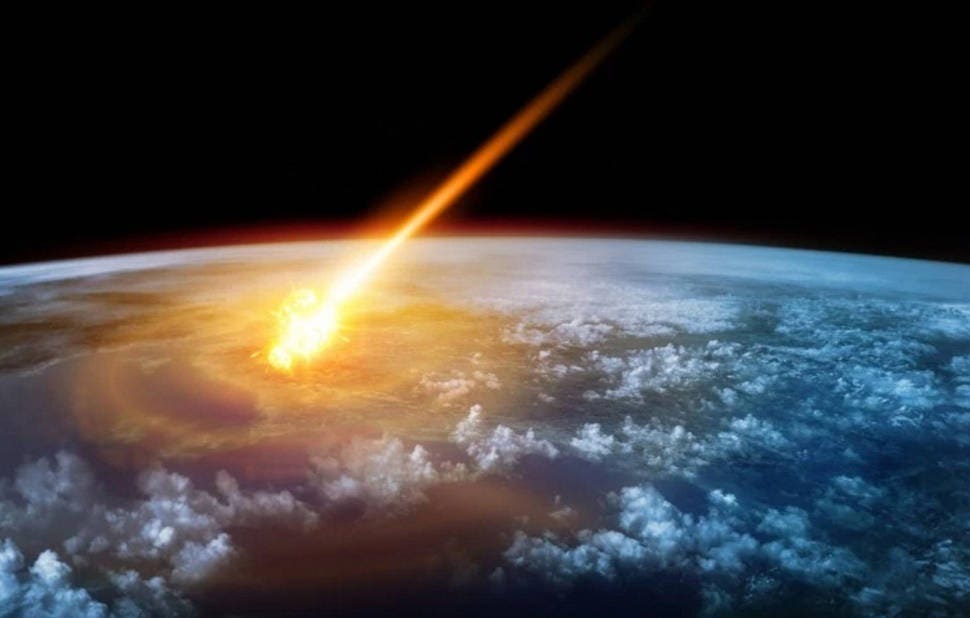 WHAT YOU GET
♥ Authentic (about Dime Sized) Piece of Meteorite
♥ Educational Card & Certificate of Authenticity!
♥ Free Shipping within the USA (discounted outside of the USA)

- Genuine meteorites will vary in size and shape
- 100% Authentic Campo Del Cielo meteorite from Argentina, discovered in 1576 over 4,000 years old!
- Great for classroom show and tell
- Make gorgeous jewelry out of it
- Ideal gift for the rock and gem collector
- SUPER GREAT DEAL FOR LIMITED TIME! - Makes for an awesome gift thats out of this world! Only a limited amount is available!

A priceless treasure, meteorites on Earth are more rare than gold. Gorgeous "thumbprints" all around this amazing piece of history and to ponder where it originated from is another mystery in itself! What planet, was it anywhere near our solar system or did it travel light-years before colliding in what must have been a massive crash to earth! Enjoy this piece of outer space, which very few others will have and every one unique.

The Campo del Cielo meteorite was discovered over 400 years ago. It developed from an asteroid that had been just starting to form its molten iron core. These meteorites are highly precious because of their high Nickel and Iron Content. It fell from outer space about 4,200–4,700 years ago. The age of the meteoric iron is about 4.6 billion years old, as old as your own solar system! Campo del Cielo translates to "Field of Heavens" and means a group of iron meteorites found 620 miles northwest of Buenos Aires, Argentina. It is among the list of the oldest reported meteorite finds, as well as being the heaviest ever retrieved on the planet (even though in numerous fragments). It was initially discovered in 1576 though aboriginal residents who known of it for a long time. It's estimated that the pure iron asteroid weighed 800 tons before impact. Pieces of this meteorite were found as far away as Paraguay.

Note: Please see photos of the meteorite to get an idea of it's size. It will vary but typically will range around the size of a US dime. If you would like a larger piece, please message me for a quote.

These meteorites fell over 4000 years ago! They were found in Campo del Cielo, Argentina from over 26 major craters where it's believed a single massive asteroid split in our atmosphere into several pieces before slamming into the ground causing such devastation that the pieces can be found throughout the country and as far away as Paraguay. It is estimated that the original meteorite weighed over 100 tons before it hit the earth (that's 200,000 lbs pounds!) and believed to be the largest meteorite to ever hit our planet! The meteorites are composed mostly of iron and nickel and its purity has been the topic of much discussion. Many have been arrested in an attempt to steal this pure precious metal from space as it belongs to the Argentina government and can only be sold through authorized dealers like PCR Jewelry.

Buying this kit supports The Pearl Buck Center in its mission to help people with disabilities obtain employment as well as the Wounded Warrior Project (WWP) charities for disabled vets.

100% SATISFACTION MONEY-BACK GUARANTEE. If you are not completely satisfied, we will gladly refund your money (minus shipping costs). See store terms of sale for more details.

I got this for my grandson, who loves science. He is so happy with it. This seller was good to work with; item shipped on time and was received in good condition.

I had always wanted to get myself a meteorite. So, when I was having a hard time finding gifts for my grandson & nephew this holiday season, l suddenly realized the meteorites would make a perfect gifts for them!! (& all 3 of us loved them!!) This is a really cool part of history to own. Michael has written alot of the information about the meteorites on the Certificate of Authenticity, as well as online, which is very interesting to know. Michael's very easy to work with & all my purchases arrived quickly, l highly recommended Patriot Coin Ring! I love that proceeds are donated to the Wounded Warrior Project too ~

the loveliest seller, fast delivery and my boyfriend loved his gift!! would definitely recommend this seller 🤍

A beautiful piece, just as advertised.