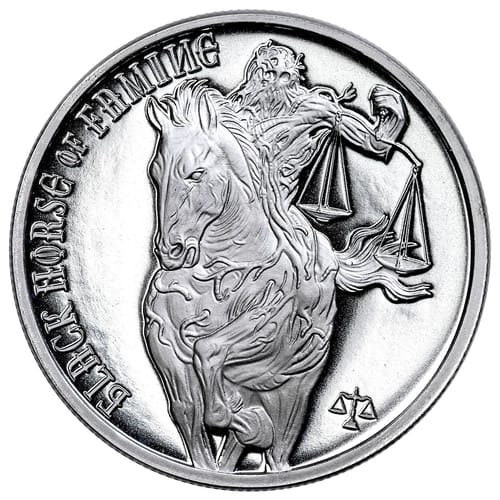 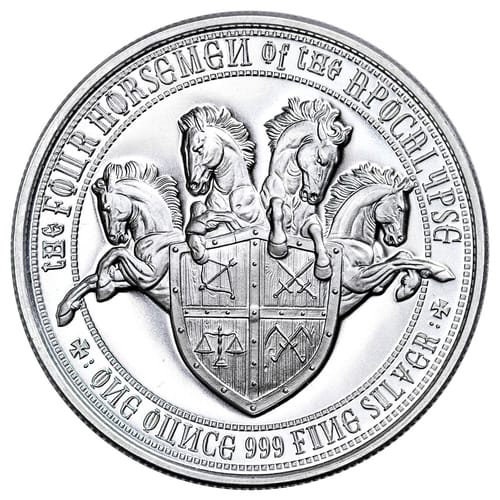 ● Each round consists of 1 troy ounce .999 fine silver
● Choose the solid .9999 Silver as it naturally comes or have it finished with a beautiful antique patina or precious metal finish.
● Fast Shipping (typically ships within 1-2 business days via USPS Mail)
● SHIPS FREE within the USA (or discounted to international destinations).
● FREE Air-Tight Cap, Velvet bag, or Plastic Pocket.

MEANING OF THIS SPECIFIC COIN:
(BLACK HORSE OF FAMINE):
The photo above is of the "Black Rider of Famine". What does the Black Horse mean in Revelation 6? The food-rich countries' potential to feed the entire planet makes it hard to imagine a famine extensive enough to thrust the earth into a global crisis. Yet the third seal of Revelation 6, employing the symbol of a black horse, describes just such a horrifying scene. This scene is depicted in this series on the Black horse and rider.

"When He opened the third seal,
I heard the third living creature say,
'Come and see.'
And I looked, and behold,
a black horse, and he who sat on it
had a pair of scales in his hand.
And I heard a voice
in the midst of the four living creatures saying,
'A quart of wheat for a denarius,
and three quarts of barley for a denarius;
and do not harm the oil and the wine.'"
—Revelation 6:5-6

The Four Horsemen rounds were released sequentially and were only available for a limited time. The Black Horse of Famine 1 oz Silver Round was the 3rd release in the immensely popular Four Horsemen of the Apocalypse Series. War was minted at Golden State Mint from October 1, 2017 through January 2, 2018. During its limited mintage release, the Black Horse of famine quickly sold out and "ARE NO LONGER AVAILABLE. The value of these coins just since the time of their release to date (July 2021) has increased by as much as 500% and will only continue to rise in value with time. This isn't just a beautiful coin with meaning but a valuable investment!